This is the first of our planned dev blogs, in which World of Darkness team members will share behind-the-scenes of their work, creating the story universe for our community and licensing partners.

One of the elements of the World of Darkness that players find most inviting is the presence of the social factions that give the world its unique feel. Vampire has clans, Werewolf has tribes, etc. — each of the World of Darkness character types has a number of groups with their own outlook, politics, and customs, all of which help shape the state of the world as a whole.

For Vampire, the clans are also what provide the initial “hook” into the game or for a character concept. Scheming Ventrue, crafty Tzimisce, cunning Ministry, stern Banu Haqim; all of these and more come together to make Vampire’s World of Darkness something unique.

They’re great ways for new players to become a part of the World of Darkness, and their differing social structures are where they take on additional depth for Storytellers and veteran players.

In the context of the world, though, what makes a clan? How are they designed and how do we use them?

From a design perspective, the function of these clans (and the other factions to come…) is to create expectations for the players. Each helps define what a Kindred of that particular clan might expect to do in stories.

Since characters act on the world, whether they’re players’ characters or Storyteller characters, every faction is designed to do something that’s expressed by verbs. That’s one of the big distinctions between designing for interactive media like games and designing for traditional media in which the “audience” doesn’t have input into what’s happening. Players verb.

(You’ll see these as other titles in the World of Darkness take shape, as well, from the Sabbat’s Paths of Enlightenment to Werewolf’s tribes.)

It all begins with an understanding of what the clan does, its role in the world. Defining that role helps players understand what they’ll be doing in their chronicles. It also helps to understand what they may be ill-suited to do — because that suggests something a coterie-mate can help with, to build bonds between the players’ characters.

As a second component of their identity, each clan is defined by a set of verbs that communicate what larger actions a Kindred of that clan might expect to take. Their Disciplines go a huge way toward shaping this, but it doesn’t have to stop there. (In many cases “the vampire as…” and even the names of the Disciplines provide their own verbs to begin with.)

It’s a succinct way of reducing stress at character creation: Simply answer “What would you like to do?” 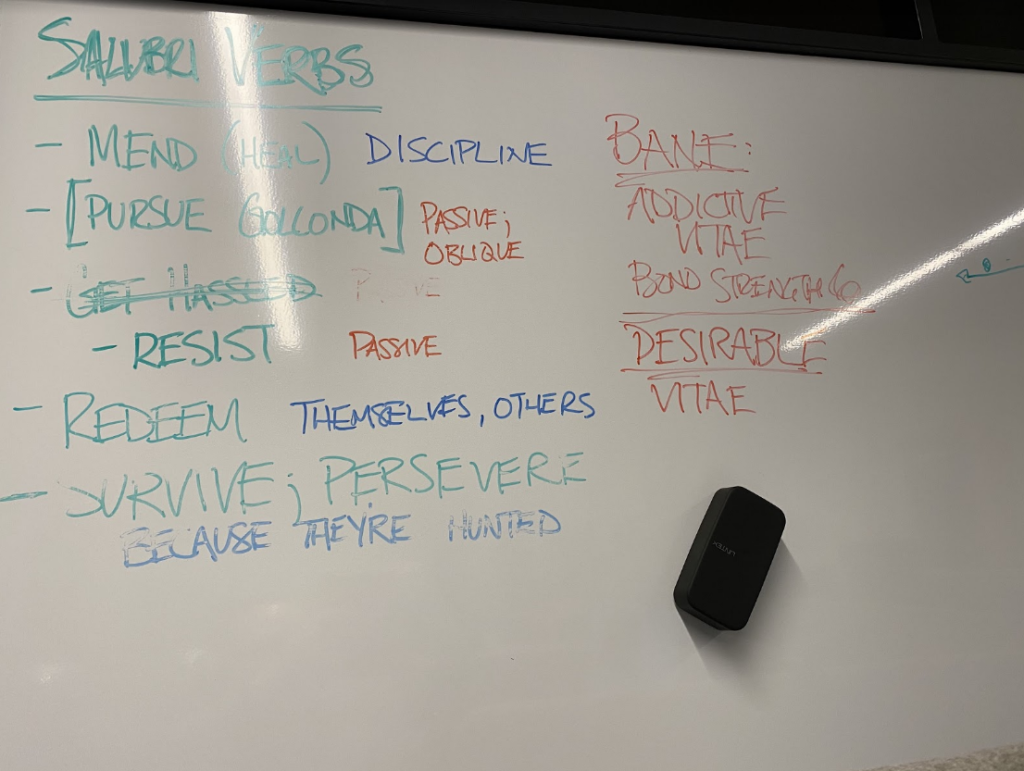 So if we look at the Gangrel, for example, we can see some verbs start to emerge: Gangrel shapechange, they withstand physical violence, and command animals. Beyond that Discipline spread, though, they fight, they roam the in-between spaces of their domain (whether urban or rural), and they prowl the fringes of the more genteel illusions of Kindred society. By contrast, look at the Tremere, who don’t have a traditionally “physical” Discipline, so a lot of front-line fighting and bare-knuckle brawling doesn’t immediately spring to mind when considering Tremere concepts.

Of course, a player can always choose to subvert expectations and play against type. The calculating Brujah, the cosmopolitan Gangrel, the compassionate Setite — all of these are viable characters who still trade on the essential experience as they depart from the archetype.

One thing that is exceptionally important to factions such as clans is that conceptually, they must be able to stand on their own. That is, a clan is defined by its verbs and its essential experience.

Clan concepts stand on their own to minimize the amount of friction required to portray them. A clan’s definition can’t hinge upon lore, on its Disciplines, or a relationship with another clan.

These concepts are strongest when they imply conflict, because stories emerge from conflict.

For example, “the vampire as rebel” suggests conflict with “the vampire as aristocrat,” which implies a long and fraught history between the Brujah and the Ventrue. But Clan Brujah is not defined by its relationship to the Ventrue. And “the vampire as fugitive” is the essential experience for the Salubri, not “the clan that the Tremere destroyed to usurp their own vampirism.”

As part of the fifth edition of the World of Darkness, the brand team is working to make sure that factions are based conceptually on what characters do, not who they or or their players are. We express what characters do through deliberately chosen verbs, not through cultures or elements of personal identities.

The intention is to be able to avoid characterization statements like, “As a Black character, you have to belong to this faction if you want to play” or “The Lasombra would never have a character like yours in their clan.” The first example is just straight-up racist. The second example restricts character concepts arbitrarily. Granted, playing a Lasombra whose character concept causes consequences is totally viable — stories emerge from such potential conflicts, remember.

With all of this in mind, the descriptions for clans (and other factions) are succinct. Reading a clan description, you can begin playing Vampire from that alone — you don’t have to know lore from a variety of sources nor clan history across a span of editions. If a clan’s essential experience speaks to you, you can start playing with it immediately, as opposed to needing to research.

This is especially important to reinforce the fifth edition’s assumption that your character is one of the young up-and-comers among the society of the Damned. The World of Darkness is a contemporary setting, recognizable as very similar to our own, so relatable concepts that speak to the modern world with a layer of additional vampiric identity help convey that familiarity, and make the presence of vampires that much more poignant by contrast.

Beyond the above cornerstones of clan design are a number of nuances that inform their identities.

Factions are social constructs more than they are occupations. A clan is a combination of a lineage, some amount of culture, and a set of inherited traits.

The World of Darkness emphasizes belonging, but that belonging isn’t intended to strip choice (or responsibility…) from the player. Players choose clans because something about their concept speaks to the player, not because it’s a set of lockstep behaviors to follow in rote.

Part of the enduring appeal of clans to players is their flexibility. No two Tremere are exactly the same. No two Toreador indulge the same desires in the same way. No two Ravnos court danger in the precise same fashion.

The Kindred are different not only in their ambitions and desires but their personalities, points of view, and backgrounds. Each clan can be reinvented endlessly in every new chronicle, which in turn makes every story and chronicle unique.

If it’s not common to the clan, it’s not a core theme of the clan.

Clans themselves often have internal factions, bloodlines, and various other sub-identities that further distinguish them from each other if a troupe wants to “zoom in” on those identities. This varies a great deal by clan, which is why it’s a finer detail, and not a core element of the clan.

For example, (almost) every Tremere can trace their lineage through the houses of the clan, because the mortal occult orders from which the Tremere originate made that a part of their culture. By contrast, not every Tzimisce will even have heard of the koldun sorcerers of the Old World, so they’re not part of that clan’s core identity.

The intention with taking this design-level look at the clans and how they operate in V5 is to give players a broader, more inclusive World of Darkness. By broadening the notions of who the clans are and defining the gameplay through creative constraint on what the clans do, the result is a more diverse game world with a place for everyone, and in-world social cultures that arise from mutual objectives. It’s a synthesis of the “game piece” (clans) with the game world that aims to invite more players to participate in more ways.

These design principles were used in the introduction of clans Salubri, Tzimisce and Ravnos to Vampire: The Masquerade 5th Edition in our recent free Companion sourcebook. Download it for free from the account section.