Inspired by Inktober and similar art challenges happening this month online, we’d like to invite you to participate in #VTMtober. We shared a list of Vampire-related themes for each day in October – the rest is up to you! Pick your chosen medium (pencil, digital, acrylic, ink…) or mix them up if you prefer, sketch one piece every single day or focus on one artwork based on your favorite topic. Remember to post the results on social media using hashtag #VTMtober, so other Vampire: The Masquerade fans can find your artwork easily. 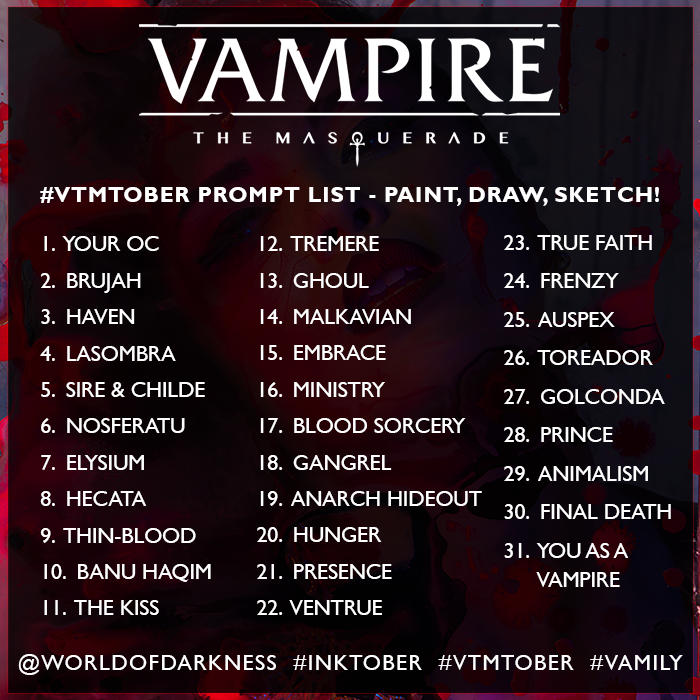 Here’s our handy guide to the daily themes:

1. YOUR OC
OC is an abbreviation for Original Character. It could be a vampire you roleplayed, or maybe how you imagine your own protagonist of Vampire: The Masquerade video game. Any character of your own creation works!

2. BRUJAH
Clan of rebels, punks and philosophers. Angry, restless Kindred who want to make a difference in the world around them. Example: Damsel from Bloodlines

3. HAVEN
Vampire’s lair, home, the place where they rest. How would they protect themselves from the sun? Is it a regular apartment, or maybe something way more (or way less) fancy?

4. LASOMBRA
The Clan of the Night, masters of shadow, unable to use technology or see their own reflection. Example: Julia from Shadows of New York

5. SIRE & CHILDE
When one vampire turns another into one, he becomes a sire. The vampire embraced by them is their childe.

6. NOSFERATU
Called “horrors”, “sewer rats” and “lepers”, all vampires of clan Nosferatu are cursed with repulsive appearance. They often stay hidden from the mortal world, trading secrets away from the curious eyes. Examples: Samuel from Bloodlines 2 and D’Angelo from Coteries of New York

7. ELYSIUM
Official gathering place of vampires, where they can interact with each other openly without the risk of breaking the Masquerade.

8. HECATA
The Clan of Death, pursuing the art of necromancy to animate corpses and summon wraiths. United family of necromantic bloodlines, from Giovanni to Nagaraja. Example: Serena from VTM: Redemption

9. THIN-BLOOD
Called Duskborn, Weaklings and The Young Ones, Thin-Bloods balance on the thin line in between life and death, mortality and vampirism. All Thin-Bloods need blood to survive, but some may even be able to walk under the sun unharmed.

10. BANU HAQIM
The Clan of Judges formerly known as “Assamites”, all vampires of clan Banu Haqim strongly believe in their personal moral code. Their clan bane made them particularly fond of vampire blood, as when they taste it, it’s difficult for them to stop – giving them the reputation of Kindred assassins.

11. THE KISS
Vampire bite, drinking blood from a mortal (or another vampire).

12. TREMERE
Usurpers and Warlocks, clan Tremere is distrusted and respected at the same time for their prowess in Blood Sorcery. Examples: Maximillian Strauss from Bloodlines and LA by Night, Agathon from Coteries of New York

13. GHOUL
A mortal who drank vampire’s blood, becoming stronger, healthier and loyal to his donor.

14. MALKAVIAN
Lunatics, Jesters and Oracles – all vampires of clan Malkavian suffer from mental derangement, which may vary as much as individuals of The Clan of the Moon do. They often see and know more, and there’s wisdom in what others may believe to be gibberish. Examples: Jeanette from VTM: Bloodlines and Hope from VTM: Coteries of New York

15. EMBRACE
The act of turning a mortal into a vampire by drinking all their blood and feeding them blood from the vampire’s vein.

16. MINISTRY
The Clan of Faith (or The Clan of Lies), formerly known as Followers of Set, also called Snakes or Serpents. Masters of transgression, luring others into unknown paths, away from their original moral codes and convictions. Because of their clan bane, Ministers shy away from the bright sources of light.

17. BLOOD SORCERY
Ritualistic magic based on the use of fresh blood.

18. GANGREL
The Clan of the Beast, sometimes called “animals” or “wolves” – the Gangrel are outcasts, often living in solitude closer to nature than to vampire politics. They’re also storytellers, often sharing stories of their elders and adventures they experienced. Examples: Beckett from VTM: Bloodlines and Tamika from VTM: Coteries of New York

19. ANARCH HIDEOUT
The meeting place or joint haven for Anarchs, a vampire faction united against their common enemy – Camarilla, a neo-feudal government of the undead.

20. HUNGER
The relentless craving for blood.

21. PRESENCE
A discipline – “superpower” – allowing vampires to attract, sway, and control emotions. Become more convincing and alluring, or push everyone away in the most terrifying way.

22. VENTRUE
The Clan of Kings, also known as Warlords or Tyrants, Ventrue are embraced to lead others through the night. Examples: Prince LaCroix from Bloodlines, Victor Temple from LA by Night

23. TRUE FAITH
A mysterious power serving as a weapon against Kindred, deep faith in something – or someone – making vampires weak and powerless in the presence of the faithful.

24. FRENZY
The loss of control over a vampire’s actions, driven by hunger, anger or supernatural means. The Beast takes the wheel.

26. TOREADOR
The Clan of the Rose, known as Divas, Artists or Degenerates – vampires obsessed by aesthetic perfection, but what is “beautiful” for a singular Toreador might differ from what others perceive as such. Examples: Velvet Velour from Bloodlines, Qadir from Coteries of New York

27. GOLCONDA
A mythical state of enlightenment, a perfect balance in between Humanity and the Beast. Many vampires seek it, but it is unknown whether it’s truly possible.

28. PRINCE
The ruler of the domain, the highest position in the “local government” of the Kindred.

29. ANIMALISM
Ability to control animals and use them as vampire’s servants.

30. FINAL DEATH
The ultimate end of a vampire.

31. YOU AS A VAMPIRE
What clan would you be? How would you dress like and look like as an undead?